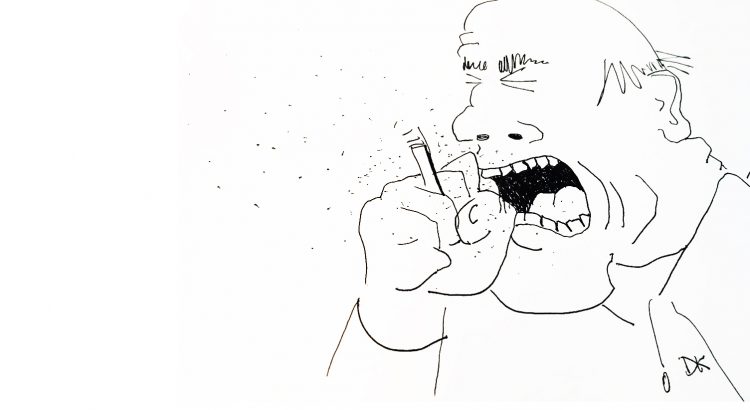 I went to a really nice private school in Chicago from 6th grade through senior year. Looking back now, I do realize that I was incredibly lucky to be there. That place really had the best of everything. Whatever a student might want to succeed. Not that I ever took advantage of that. I truly was a shitty student. I just didn’t study. I hardly tried at all. I didn’t get good grades until college.

My grammar & high school report cards were full of those statements which teachers hate writing the most; “Dan is capable and occasionally displays his talents, but he simply does not apply himself. Dan does not live up to his potential.” Translation: “This kid is a complete fucking waste of my time. We all think he’s one of those partiers who will never graduate from college. We just hope he doesn’t steal jewelry from customers in his future career as a drywall installer.”

While I was a completely worthless, shitty, lazy student, there was one subject that got my undivided attention. And, this is true for every teenager. Driver’s Ed. I wanted my driver’s license so damn bad. I wanted to be “cool Dan,” behind the wheel. Cruising with the radio playing loud. Going on dates. You know. We’ve all been there. I was committed to Driver’s Ed. This is one opportunity I would not blow. I was going to be on my very best behavior and ace this course.

What I didn’t expect in this upscale private school is that the biggest hoodlum in the room wasn’t me. It was the instructor. I have no idea how this scumbag got the job.

He was a bitter, old, fat, balding, racist white guy who hated the whole world. His entire wardrobe was made up of various shades of brown, accented with faded stains. Probably gravy or barbeque sauce. I think. Also shades of brown. His yellow teeth looked like they’d also be brown in a couple years, if he lived that long. He was always sweating and breathing hard. Some vital organs were working way too hard keeping him upright. This colorless, diseased, greasy presentation was the perfect platform from which to spew miserable anger.

We were all there to prove we could be trusted behind the wheel. But, he didn’t give a shit. He didn’t use his time with us to evaluate our temperament, reflexes or depth perception. We were the audience for his rants. That was our main purpose. The best way to stay out of trouble with this guy was to nod at his sermons of hatred. Give him a few “amens.” Don’t be a pansy rich kid. Don’t be a snitch. Don’t act shocked when he complains loudly that Chinese and female drivers are fucking up the roads for everyone. We’d find out soon enough, he promised. Don’t question the appropriateness of him balling up his fists and yelling at the ceiling in front of a room full of teenagers “And God fucking help me if I get cut off by another one of those God damned little Volkswagens! Those stupid fucking cars, so little you can’t even see them. Always zipping in & out of lanes. God dammit I fucking hate them!!” Of course I never to told him I would be driving a Volkswagen.

When we left the classroom for behind-the-wheel instruction with Mr. Greasy Hatred, he set the tone for how you drive on the mean streets of Chicago. Two of us would load into the red Chevy Chevette with him. Me sweating in the driver’s seat. My friend twitching with fear in the back. Once the ignition was turned, Mr. Hatred would immediately yell at me to “Just hang on a God Damn minute, Jesus Fucking Christ already.” I thought maybe I’d forgotten to check my mirrors. Made some stupid rookie mistake. Man, was he going to unload on me. But, Greasy just needed a moment to pull out his red foil pack of unfiltered Pall Mall cigarettes and light one up.

This was his pre-drive ritual. Mr. Hatred would take a long, deep drag and then explode with violent hacking…phlegm bursting loose somewhere deep inside him. He would quickly crank down the passenger window, grunting with the phlem rattling around in his throat, then launch out a dark yellow loogie to splat heavily on the hot asphalt. Next, he would flick the lit cigarette out the window, and turn red-face & sweating back at me; “I gotta quit these fucking things. Dammit. Don’t ever smoke, kid.” Yessir. “These things will kill you right fucking quick.” Yessir. “Well?” Sir? “Well, what fuck are you waiting for, dammit? Let’s get the fucking show on the road already! I don’t have all God damned day! Just do anything stupid. Now GO!!”

I got my driver’s license. And, the lessons I learned were don’t smoke Pall Mall unfiltered cigarettes, don’t do anything stupid, and most importantly…don’t grow up to be anything like Mr. Greasy Hatred. I still have a great deal of anger towards a lot of things in the world. Sure I do. But, he taught me that you need to do a much better job of hiding it. Or, at least have a little more style when sharing your opinions about things you don’t like. You might even agree with a lot of what Mr. Hatred said. But, if you share all those opinions with everyone all the time, you’re going to end up a sick, lonely, miserable person. Thanks, Mr. Hatred. You taught me a lot. Now, if you’ll excuse me…I’ve gotta get the fucking show on the road. I don’t have all God damned day.