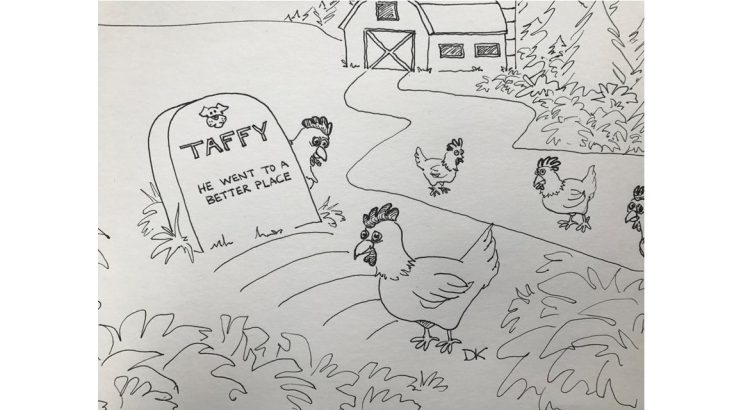 It’s an old expression. A gentle way of saying somebody has died…when we say they “have gone to a better place.” By not offering specifics, we allow the recipient to imagine what that better place might be. Heaven. A beach. A rolling meadow, washed in sunshine with tall grass swaying in a gentle breeze. Whatever. They use their imagination to fill in the blanks and have happy thoughts about something horrible. Much easier on everyone.

When we hear that someone has gone to a better place, we also know we are supposed to agree that they indeed have gone to a better place. And, we also get the message to not ask any questions about what happened. We’ve been offered a platitude which clearly communicates that the details behind the situation may be too painful to share.

When telling a child that a relative or family pet has died, saying they have gone to a better place helps us avoid a conversation which might be too difficult for them to grasp. The thought of that person or pet no longer being with us is already difficult. That’s enough to deal with. There’s no need to burden the child with trying to understand that person or pet no longer exists at all, and that they may have endured pain in their final hours. Parents also tell their children the family pet has gone to a better place when they’ve had it put down by the vet. A child might not grasp the need for such a decision. They might accuse mom and dad of murder.

My mom and dad told me that our dog Taffy had gone to a better place. And, as many parents do in this situation, they embellished to help me out. They described a wonderful farm to which they had sent Taffy in New Hampshire, near where we spent our summers there. I didn’t know the “the farm” was such a typical story with dead dogs. And, they knew the concept wouldn’t be too foreign to me, even as a city kid. They knew I loved New Hampshire. Taffy was now at a farm with chickens and sheep for him to chase all day long. He could run free. Taffy always was a country dog, they reminded me. A big yellow lab that was raised in open spaces by my grandfather. When my grandfather died, we took Taffy to Chicago. They reminded me that Taffy never seemed happy in the city. He hated being on a leash. He was always running away.

They did a pretty good sales job on me. While I was really upset that Taffy was no longer around for me to play with, I knew they were right. I was actually walking Taffy on our street just a couple weeks before. When I knelt down to tie my shoe, he ran away. I chased after Taffy, yelling his name. He didn’t even look back or slow down one bit. He bolted as fast as he could, and turned the corner before I’d even run thirty feet. I knew he loved me. But, he still ran away from me the first chance he got. So, yeah, we all agreed that Taffy wasn’t very happy in the city. I embraced the idea of the wonderful farm, and Taffy running free…chasing those chickens and sheep all day long. I got over his not being around pretty quickly. My visions of the farm helped me feel happy for Taffy. He was indeed in a better place.

About a week later, I was playing at my best friend Scott’s house. When I was going home for dinner, his mom was down on one knee, helping me put on my coat. I liked her a lot, and she liked me. She always said so. She always smelled nice, and was always very kind to me. I always wanted to hug her. So, I always let her get close to me.

She was leaning in close, her face just a few inches from mine. After my coat was on, she was straightened my hair, and asked me in a soft voice how Taffy was. She liked Taffy a lot. So, I happily told her that Taffy was now in a better place. He was on a wonderful farm where he could chase the other animals all day long. Lots of open space, where he would be happier. My parents had taken him there. I was too young to understand why her face changed so suddenly. I didn’t understand her expression. She instantly went from soft and caring to sickly. I didn’t get it at all. I thought maybe she was going to be sick, and I was worried about her. And, even though she was probably about to throw up, she also seemed very worried about me. I never forgot that moment. It would keep coming back to me over the years. I eventually grew to understand exactly what had happened.

I eventually grew to understand there was no Santa, Easter Bunny or Tooth Fairy. I eventually grew to understand that the reassuring story about “the farm” was just a common dodge for parents to get out of a tough conversation about dead dogs. Just as common as saying someone “had woken up on the wrong side of the bed” to avoid saying they’re being a total asshole today….or every day. I was long over Taffy’s departure when I learned all this. So, I never asked my parents why they had lied to me. What’s the point? I had also grown up to understand the concept of a white lie. I know my parents would do everything they could to avoid being accused of murdering our dog. But, I also know they wanted me to be happy for Taffy. They wanted Taffy’s departure to be easier for me. I understand that. So, why bring it up? But, none of this ever faded away for me.

I had also learned that I have a pretty dark sense of humor. So, the fact that I had so effusively shared my parent’s lie with Scott’s mom is pretty damn funny to me. Here’s this kid in front of her, so happy to share that his parents have murdered his dog. He’s repeating one of the most common phrases to describe a dog’s death, and he has no idea what he’s saying. He sounds like a complete idiot. She was just innocently making conversation with a child and stepped on a land mine. She must have really felt awful, and wished she could just vanish. She was probably thinking that even this idiot child would now suddenly figure out what had really happened to his dog, just by hearing his own stupid response to her innocent question. She winced after hearing the “click” when she stepped on the mine. She was clenched, waiting for the explosion when I suddenly figured out the truth. But, nope. She didn’t get blown up. She was safe. I’m a moron. I didn’t figure it out until years later.

My parents are getting older now. And, lately, I’m always sharing my memories with them. I’m in that whole “don’t let anything go unsaid” relationship with them. I turned 50 this past year, so that’s a lot of history to share. While at their dinner table a few months back, I suddenly remembered that moment with Scott’s mom. I chuckled while taking a sip of wine and asked them if Scott’s mom had ever said anything to them about that time after they had put Taffy down, when she and I had this awkward moment together. She must have told them, because she felt like total hell. She was probably worried that she was the reason I would figure it all out sooner than I was supposed to.

I put my glass down hard…C’mon guys. Enough with the bullshit. I got over this years ago. I’m fifty years old now! Stop treating me like a child. Taffy was getting old. You had him put down. And, just like telling me to be good or Santa wouldn’t bring me any presents…you soothed me with the most common “in a better place” story ever. The old “farm” dodge? C’mon guys. I’m not stupid. Why are you still keeping this up, even now?

No, Dan. Really. You know Taffy wasn’t doing well in the city. He was always a country dog. He was suffering in Chicago. He went to a farm on Gardner Hill Road in Tamworth, New Hampshire. We had met the people during one of our summers there. Lovely people. They loved dogs, and they really loved Taffy. We visited with them a bunch of times, and Taffy simply loved it there. We let him stay over a few times, eventually for a week at a time. He was so happy. It was a much better place for him. We knew it was the right thing to do. And, we didn’t want to get into it with you. A clean break. We knew when we left him there, he truly was indeed in a better place.

I stared at my parents. They stared back at me.

I’ve grown up a lot over the years. I’ve learned a great deal. I’ve matured. I have much more self-control. I’m much more aware of who I am, and how I got here. I know my selfish tendencies. I know I can be deceitful and charming when I’m trying to get what I want. I might even lie a bit in the process. I’m honest about these traits I have. I also know where I got them. From these people.

These people…who are staring me down now…and sticking to their story.

Is this a test? Are they waiting to see if I really have grown up? Are they wondering if the immature Dan will surface, and loudly accuse them of being liars and murderers, rather than continuing the polite dinner conversation? Or…Are they wondering just how gullible I might still be, if maybe they can suck me back into believing the farm is real? Or…Maybe they just don’t know how to back down from a lie, regardless of how ridiculous it sounds, even as the truth becomes obvious. Or…Or…Is the farm real? If I don’t trust them and accept that the farm is real, then maybe I am still just their child…only thinking and believing what I want to, just disagreeing with them to be difficult.

So…wait…Taffy really did go to a farm?

Yes. A much better place.

The farm is real? 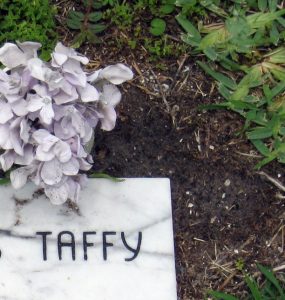 Yes. It’s wonderful. We should all be lucky enough to go to such a place when we die.