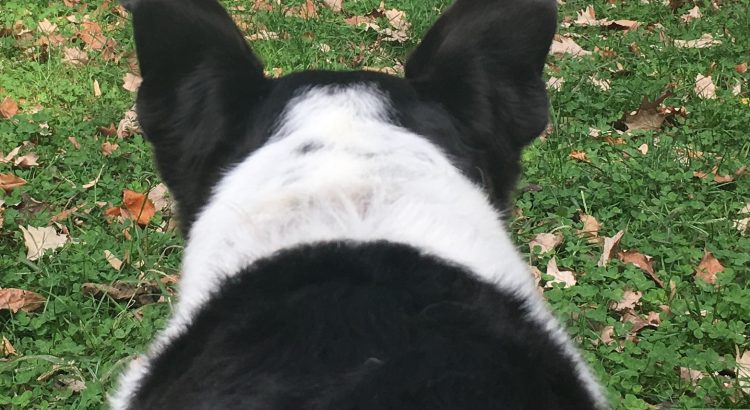 Cali can’t catch squirrels. They’re way too fast. And quick. They change direction much faster than she can. They almost seem to toy with her…turning their back on her, twitching their fat tail, shoving their head in a hole. The appearance of vulnerability, completely unaware of the danger. That’s bullshit. The squirrel hears her bolt a few steps before they quickly cut left, right, then shoot up a tree. She’s always three feet behind when they get safely out of her reach. Just three feet every time. That’s no coincidence. That’s skill and experience. They know exactly what they’re doing. Those squirrels leave her with just enough hope, let her get just close enough, that her blood is pumping hard from having “JUST missed it!!” Every time. Cali never wises up.

The squirrels clearly have the upper hand. So, I mean really, what’s the harm in letting her chase them? What the hell would she do if she ever caught one anyway? She wouldn’t know what to do. While she’s crazy for the hunt, and never tires in her earnest effort to catch one, maybe she doesn’t really expect to succeed. If a fleeing squirrel suddenly turned around and confronted her, She’d probably jump back in fear, just because she never expected to get so close. If given her shot, she would blow it. She’s no hunter.

So, it’s a game. It’s a harmless game. Maybe just some psychological damage for the dog that never gets the prize. But, she’s more than a willing player. She never gets frustrated by losing. She loves it.

Eventually chasing squirrels becomes a big part of all our walks. She spots one and immediately stiffens up like a bird dog, pointing right at it. I get down on one knee and whisper encouragement in her ear while I release her leash, still firmly holding her collar. She feels my strong grip, and she knows I haven’t let her go while she gets a pep talk; “Ohhh, look at that one Cali. It looks delicious. Nice and fat. Can you get it? Can you catch that delicious squirrel? Okay…..GO!!!” She feels my grip release and goes flying to just miss the squirrel by three feet…barking, panting, back hair up, running quick circles around the bottom of the tree, looking back at me to praise her for getting SO close. Instead, I bring her back down to earth with a hail of insults; “You’re way too slow, Cali. You got no shot. No chance. That squirrel is up there laughing at you. How humiliating for you. You’re no dog of mine. We need a real hunting dog in this family.” I go on and on loudly teasing her ineptitude. That’s the game, and we play it all the time. We have a blast.

The city’s many greenways are our preferred hunting grounds. We leave the sidewalks whenever we can. We prefer these wider and wilder spaces in between the buildings. The greenways have long, dense hedgerows. More trees. Raised flower beds. Lots of places for Cali to go crazy far from the streets and cars. Cali is always off leash in these more open spaces as we play our harmless game.

Then we meet the dumbest squirrel ever.

We’re walking in the pedestrian greenway behind the Acme grocery store, on squirrel patrol. This greenway is one of our favorites. There are long, dense hedgerows on either side with trees rising up from them like columns proudly lining of our walk. The hedges are always teaming with birds, bringing a chorus to our hunting party. Usually we just stroll through while Cali runs side to side sniffing everything. Usually not much action. Until the last time we went through there.

As we neared a tall oak, suddenly this dumb ass squirrel jumped out of the deep hedgerow and plopped down on the sidewalk right in front of her, equidistant between two trees, easily fifteen feet apart. It landed with a thud in no man’s land. One dog-length in front of Cali. Just under three feet.

It froze. It just. Fucking. Froze.

The speed of Cali’s charge shocked me. No hesitation whatsoever. With the swift confidence of a trained assassin, she was on it in a flash and immediately got in a solid, crushing bite around its middle. There was an audible sound of her jaws colliding within its body. She violently snapped her head to the side and the squirrel flew out of her mouth back into the hedge. Cali jumped in right after it with a single motion upon release, like she’d thrown it to herself. The certainty of her motions didn’t allow me time to move my feet. The whole hedge shook violently before me as branches snapped sharply. Cali’s growling was deeper and more serious than in any dogfight, when she’s usually on the defense. She was all ferocious business. Clearly intending to kill. I was actually frightened, and imagined the dark inside of the hedge was a buzz saw for my hands. I didn’t see either of them, only the savage frenzy of the hedge as it jumped, cracked and snapped. Twigs were scattering over the bricks in all directions.

Suddenly the black and white of Cali appeared with a loud snap out of the dark green hedge. She slid sideways like a speed skater to leap back into the darkness from a better angle of attack. Brutal, crazed, murderous pursuit. I took that chance to grab her collar with one hand and wrap my other arm around her lunging shoulder. Her body was rock hard. She was twitching in urgent attempts back at the bush, forcing out sharp breaths like coughs. I kept hold around her shoulders and neck. In a moment that lasted far too long, she knew I had her in my always firm grip. The force of her lunges abated somewhat. Her fierce coughs were still sharp while I somehow managed to get her back on the leash.

Shit! That all happened so fucking fast! That crushing bite was right on target. That horrible sound. A mortal wound for sure. Gotta find that squirrel. Maybe he got lucky and I could still save him. Would Cali’s vet treat a squirrel? It’s kind of late. Was the vet still open? If not, where would I take him? There’s that 24 hour vet down on Washington. My plan B. I was responsible for this. I felt the shame, the heat on my face, that pounding in my ears.

I planted my foot on Cali’s leash and was quickly on my knees, digging through the leaves under the hedge. The leaves were so deep. Especially there at the base of the tree. I kept digging, searching out wider from where Cali was trying to get back in. Nothing. Maybe it got away?

I straightened up to look around and decide what to do next. Yah! What’s this? Right at eye level was the squirrel, hanging onto the tree. He’s looking right at me. His eyes were wide with panic because clearly I’d seen him. He didn’t take his wide, black eyes off of me. But, his head shivered all around, looking for the fastest way out. That fast-twitch ability of speedy squirrels. He would be gone in an instant.

But no. He didn’t fly up the tree or leap over the brick wall behind him. He was struggling. He lunged up the tree by throwing just his front claws forward. His back claws don’t follow. He’d only moved an inch. The front claws dug into the bark and slowly pull his elongated body up into a hunch. Why was he in this odd position? I noticed he actually had a mangled back leg in his mouth. Desperately biting down so hard to bring it along. I didn’t see it on his far side. His eyes still showed panic, and his breathing was quick. He strained to pull himself up the tree with just his front claws, the rear of his body barely scraping up over the bark. Maybe just a hair.

I leaned in closer. I tried to move quickly, but not too suddenly. Hopefully my movement told him that I care, and wanted to help. Maybe I could grab him gently. I didn’t want to hurt him any worse. He was just over an arm’s reach from me.

His body then started to sway back and forth. He was losing strength. His two skinny little forelegs started to shake. As I leaned in, I swear the look in his eyes changed in a flash. His expression of sheer panic suddenly slammed into the resignation of “oh fuck, I’m not gonna make it” and then a completely blank look as he rolled backwards off the tree into the hedge. In the space of two seconds, I saw him first realize his fate, then accept it immediately and let go, give up. NO!! He couldn’t give up! I was back on my knees digging frantically through the bed of leaves. He fell right HERE. I could still get him to the vet! Where could he have gone? He should have been right there. But no, he was gone. I couldn’t find him.

I turned around, landing hard on my butt and just sat there on the sidewalk. Palms spread against the bricks to steady myself. Now I was the one breathing hard, in sharp coughs. I looked up at Cali, expecting her expression to match my wide-eyed mania. Her breathing to match my short bursts. She just looked back at me passively. Then she looked over her shoulder at some birds, calmly watching their flight over the Acme, beyond the greenway. She was so calm. It was over for her. She doesn’t feel guilt. But, I saw the squirrel’s eyes. That’s all I could see. Those sharp little eyes that instantly went from fast-twitch retreat to dull, blank submission. “You’re a murderer Cali” I told her. “And, I’m your accomplice. Or, is it the other way around? Damn. We did this. You know that right?” She just stood up & wagged her tail because I was talking directly at her. That always meant something good, like I had told her we’re off to go do even more fun stuff. Yes Cali. Let’s go do more fun stuff. My companion. Man’s best friend. My accomplice. The squirrel murderer. The assassin I trained so well.